The Reef and Shipwrecks at Cape Enrage 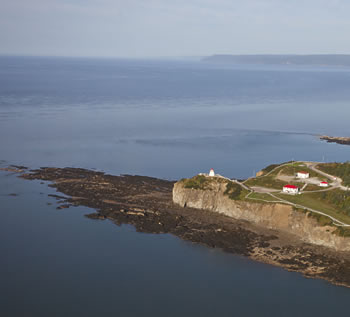 Cape Enrage has a large reef pointing south and extending into the bay. This is a prime reason the water gets violent, especially during mid-tide when it is partially exposed and the water is in motion.

"The fact that Cape Enrage jutted out into the Bay of Fundy nearly half way to Nova Scotia made it prone to shipwreck many sailors. The water is very deep on the seaward (northeast) side of Cape Enrage and sailors tended to travel close to Cape Enrage in the winter to avoid ice which was common along the south shore against Nova Scotia. In addition, the busiest trade route was past Cape Enrage rather than past Apple River."

"To the southward of Cape Split, it Scotch Bay, a wide, open roadstead, with extensive mud-flats at its upper extreme. Considerable quantities of Shad are taken on these flats, chiefly in weirs; but a large seine is also used, of which complaint was made, as being injurious to the fisheries, by taking numbers of small fish of every description. Here the Shad fishery ceased on the Southern Shore of the Bay of Fundy and the geological character of the Coast changes. The bold and rugged cliffs of the South Shore consist chiefly of trap rocks."