Geology and Fossils of Cape Enrage 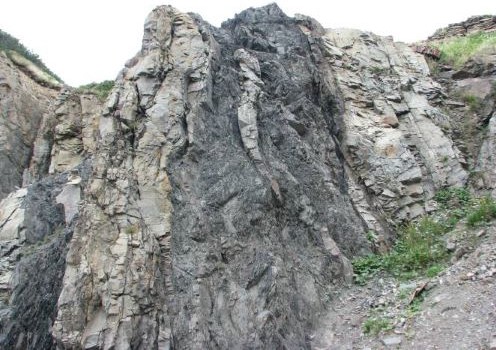 The fossils at Cape Enrage are contained in the layers of sedimentary rock from the Upper Carboniferous period approximately 320 million years old. There is an abundance of plant trunk fossils that have been created by being washed downstream and trapped along the river channels in 'log jam-ups' along the sides of large river channels.

A diverse flora exists at the Cape Enrage site, with lowland plants, including beautifully preserved giant horsetail-like trees called Calamites, and classic lycopsid bark and roots. An abundance of frond stems with ropey bark textures and large branch knots are also well preserved at the site. Small invertebrate trackways are also present. These trackways have classically been assigned to millipedes, however horseshoe crabs may also produce similar traces.

The cliff section displays predominantly river-dominated sediments. Multiple sandstone and mudstone infilled river channels can be seen in cross-section, and where exposed, spectacular rippled surfaces can be found. 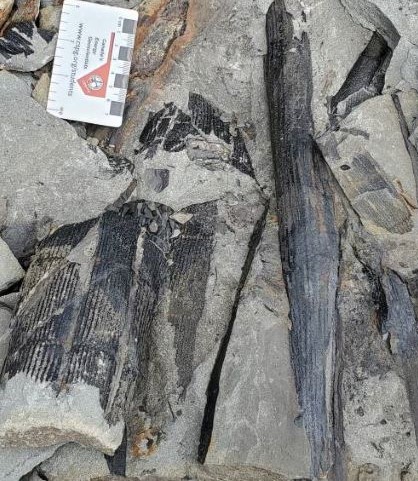 Calamites are the most abundant type of plant fossils found at Cape Enrage. They reached a height of up to 10 meters (30 feet) as opposed to today’s counterpart, the Field Horsetail, which only reaches 1.5 meters (5 feet) at maximum in tropical environments, considerably less locally. Calamites grew along rivers in the coal swamps of the Carboniferous period.
The horsetail fossils have a bamboo appearance with vertical ribbing and horizontal sections called nodes. A whorl of needle shaped leaves (Annularia) radiated from each segment of the plant and from the branches.
In most cases at Cape Enrage, a cast of the pith core of the plant is preserved where the outer bark is often not. The void inside the stem, that was created after the soft tissue rotted away, was the perfect environment for sediment to accumulate and create these fossils. As the bottom of these trees was cones of funnel-shaped from which the stringy roots (Pinnularia) would have held the tree in place; being already buried in sediment gave them a better chance of preservation.

The stems and branches of the Fern Tree are commonly found in fossil log jams at Cape Enrage. However, distinguishing the species from the bark patterns can be difficult, the fronds of leaves are rarely preserved with the log jams. They are, however, preserved in different rock layers at this site. At least three species of ferns are preserved and seldomly found at Cape Enrage. The size and the veins of the fern are a useful distinguishing feature. 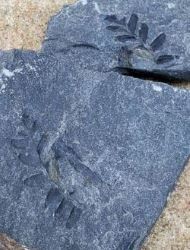 Alethopteris is one of the most abundant ferns known at Cape Enrage. It can be distinguished by its leaves that interconnect at the base and from their parallel veins that grow from a central vein.
Neuropteris is a rare fern at Cape Enrage that has a network of veins on each leaf.
Sphenopteris can be identified by its tiny size and sharp edges. Often the first impression upon seeing this fern is how elegant it is.

Lepidodendron - Arborescent lycopsid trees dominated the lowland swamps of the Upper Carboniferous period (Pennsylvanian Period) and contributed to most of the peat moss deposits that would later be transformed by heat and pressure into coals, from which the time period was named after. The most famous scale tree "Lepidodendron" could reach heights of 30-50 meters (100-165 feet) with a diameter of 1-2 meters (3-6 feet). Identifying the type of Lycopsid tree can be done by examining the bark patterns on the fossils. The leaves of a lycopod grew directly off the trunk and branches in a spiral pattern around the bark. As the tree matured, the leaves fell and left a diamond-shaped “leaf scar”. The leaf scars are interlocking with the long side of the diamond shape running lengthwise with the trunk.
Lepidophloios - A rare lycopsid tree found at Cape Enrage is Lepidophloios. This lycopsid tree can be identified by its diamond shaped leaf scars that are arranged opposite to Lepidodendron with the diamond shaped leaf scars running across the trunk widthwise.
Stigmaria is the root of these lycopsid trees; they are cylindrical with dimples on the fossil’s surface where rootlets would have once been attached.
Lepidostrobus is the cone of the Lepidodendron and superficially resembles a feather, cigar or pinecone when it is preserved as a fossil compression. The cone carried single-cells spores. 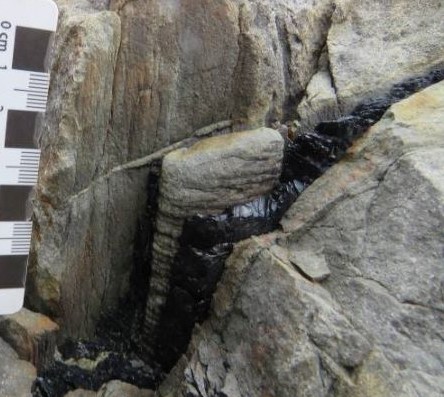 Cordaites are now an extinct division of the Progymnosperm trees, one the first group of plants producing seeds that unite Conifers, Cycads and Ginkgos. This tree grew in the uplands, upstream of the Carboniferous swamps, often on the sides of the Appalachian Mountains. They could exceed heights of 30 meters (100 feet) and may have had root systems similar to that of the modern Mangrove tree.
Cordaites principalis is the name for the isolated leaves; they are long, strap-like with parallel veins. Cordaites are so long that they are rarely found complete; but they are commonly seen in the Boss Point Formation sandstones at Cape Enrage where they were transported downstream in large river systems from their upland homes to be preserved as fossilized log jams.
Artesia is the name of the pith (central core) casts of the Cordaites stem. This tissue decayed rapidly leaving a hollow that would be filled by sediment. This central cavity is crossed by transverse ribs of more decay-resistant tissue that gives Artesia horizontal bands.
In our fossils, you may also recognize:
Mesoxylon/Dadoxylon - the bark, which had internal rings like a tree today, commonly coalify or permineralized.
Cordaitanthus - The ovule or pollen bearing branches.
Cardiocarpes - The heart-shaped seed.

Trace Fossils - Footprints or evidence left by an animal 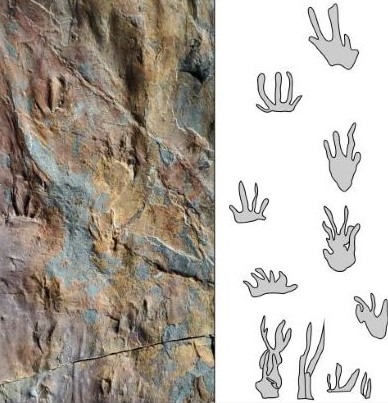 Arthropleura tracks – only a single example of the colossal millipede Arthropleura has been found at Cape Enrage. These tracks are made of 2 parallel rows of impressions that can be up to 50 cm wide and made by a millipede that was up to 2 m long. The footprints of these animals are called Diplichnites and are common fossils elsewhere in the world but rare at Cape Enrage in this size.  They are amongst some of the oldest examples of these giant invertebrates in Atlantic Canada. However, small Diplichnites trackways are commonly found on site.
Kouphichnium tracks – Horseshoe crabs are a living fossil, and date back to ~400 million years ago. They are a common fossil in the Carboniferous but rare at Cape Enrage. Their footprint can be identified by 2 parallel rows of “Y” shaped impressions and commonly have a tail (telson) drag. These animals spend most of their time in salt-water deep-sea environments but travel to the shorelines (fresh and brackish waters) to lay their eggs in spring of each year. Both small juvenile and larger adult trackways of these animals are now known from shales at Cape Enrage.
Amphibian and reptile tracks – The Carboniferous Period is known to house diverse groups of early amphibians and the oldest known reptiles in the fossil record. Footprints of these animals are found preserved in the sandstones that represent the sides of fossil river channels.
Borrows - Helminthopsis, Helminthoidichnites, Cochlichnus - These sinuous lines are possibly made by insect larvae, annelid worms or nematodes. They are commonly found on ripple marks sedimentary structures. 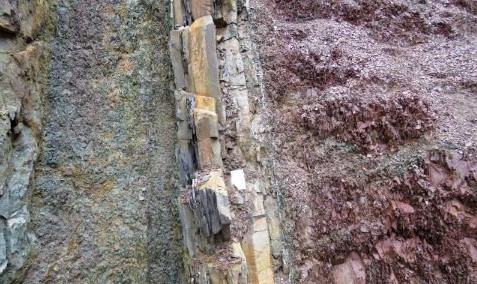 Clues hidden in the rocks can tell us stories from millions of years ago. In conjunction with the fossils, the different types of rocks can help us understand the bigger picture of what the landscape looked like at Cape Enrage 320 million years ago. The colour, grain size, and textures preserved in the sandstones and sedimentary rocks are part of these clues.
The colour of the rock is one of the first clues a geologist notices. If ground water that ran through the sediments was exposed to oxygen, then iron in the water rusts to form “iron oxide”, staining the rocks red or brown in colour. The red mudstones near Barn Marsh Beach are a reddish-pink color suggesting they were exposed to the air, representing times of low sea levels and dry conditions. Most of the rocks at Cape Enrage are a sandy buff colour or grey. The grey suggests that very little oxidation took place. Either there were low oxygen levels in the water or high levels of organic matter in the sediment and water. When it decays, organic matter uses up the oxygen in the ground water and prevents the iron present from rusting. Flecks of black carbon and plant debris can be found in both environments and are common throughout the section.
Conglomerates are pebbly-filled sandstones. The size, roundness, sorting and mineral type of the rock tells us a lot about the ancient environment. Fast moving rivers or flash floods can carry gravel, pebbles or even boulders if the water is turbulent enough coming from far away mountains. Each clue can be followed to indicate a bigger picture of which rock formation these sediments originated from.
Mudstones are associated with calm waters; where small particles have time to settle. This may be on the sides of rivers in the “flood plains” during times when the rivers flooded, or at the bottom of lakes and oceans.
Ripple marks can tell us the direction of a current and where it formed: in a river, on a beach, an estuary or on a dune and if it was a tidal environment. They are also a great material to preserve trace fossils such as tracks and burrows.

All fossils are protected by the Heritage Conservation Act. It stipulates that any fossil discovered in the province must not be destroyed or removed from site where they are found without the required permit.

Cape Enrage interpretive Center has an amateur paleontologist permit. Collection of loose specimens is permitted by the cape enrage staff for learning purposes. This permit is also intended to offer surveillance of the fossil site for new and important fossils that may be of importance to the New Brunswick Museum. All collected fossils are catalogued and examined by the Heritage Inspector.