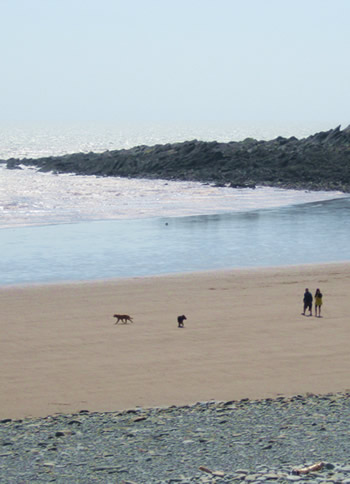 About half a kilometre before you arrive at the Fundy's Cape Enrage Interpretive Centre you will pass Barn Marsh Island beach.

This extensive sandbeach is covered during the last two hours of the incoming (flood) tide and the first two hours of the outgoing (ebb) tide. The exposed, sandy ocean floor extends for about two hundred metres at low tide and its width extends from Inner Head to Outer Head, the latter being the cliffs of Barn Marsh Island upon which sits the Cape Enrage lighthouse.

The beach is owned by New Brunswick Nature Trust, as are portions of the adjoining marsh. Swimming is common; however it is always at your own risk. No known undercurrents are present but extreme Bay currents extend from Inner Head to Outer Head at almost all times of tide.

Barn Marsh Island Beach extends the entire 6 Km length of Barn Marsh Island on the Bay side. It is primarily accessible from the Cape Enrage lighthouse property where a set of stairs descends the 30 metres to the beach. Use of the stairs is at your own risk. There is a constant danger of rockfalls from the 40-metre cliffs that extend for about four of the six kilometres of beach. Therefore, do not linger near the foot of the cliffs. On the northeast (away from the Bay) side of the beach, Barn Marsh Creek extends nearly 6 Km parallel to Barn Marsh Island out to the Bay at Bray Beach. Each incoming tide fills the marsh and on extreme tides, fills the marshland from treeline to treeline.

This beach is not navigable from two hours before high tide to two hours after high tide. Be certain to know when the safe times for hiking are by checking with the Cape Enrage staff before you attempt the hike. Departure from the beach is only possible by traveling along the beach since the cliffs prevent direct access to safety in the event of a "tidal miscalculation".

This is truly "the most wilderness beach" in the area and is the ultimate walk on the ocean floor. Fossils are strewn everywhere as they erode from the cliff faces. Allow at least four hours to complete the hike. As on all beaches, rocks and fossils may not be removed. Litter should be carried home for disposal, although refuse barrels are provided by Shepody Fish and Game Association. Fires on the beach must be with the permission of the Department of Natural Resources.

Before going to the beach... 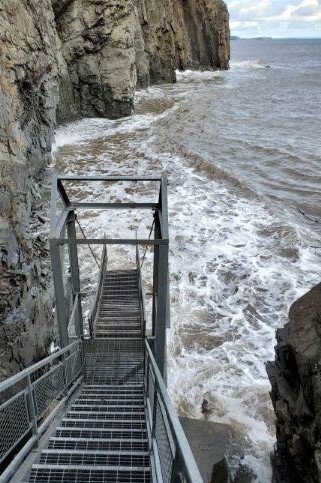 Our cliffs expose rocks that are 320 million years old (Upper Carboniferous period). New Brunswick, at that time, was close to the equator and would have been a tropical climate. The oxygen level reached a peak of 35% as opposed to today’s 21%, while the CO₂ levels were 3X higher than today’s levels. The Earth was also spinning faster which created strong winds and violent storms that could bring down forests rapidly. The giant scale trees could reach their full size in 10-15 years and replenish the coal bearing swamps many times a century. By this time amphibians were well established on land. Their bones have yet to be found at Cape Enrage but footprints in the fossilized riverbanks and floodplains tell us that these early animals once roamed the riverbanks of this area.
Keep your eyes open for the next big discovery. The panels on site will explain the most common fossils found here. If you see fossils while you're exploring the beach, take pictures and mark its GPS location. Fossils should never be disturbed, they give the most information while still in place. Show the staff your discovery for identification. If the fossil is deemed important, a staff will go examine it with you. The fossils that cannot be identified by Cape Enrage employees are shown to a paleontologist in hopes of finding something new!
All Fossil Must Remain On-Site
They are protected by the Heritage Conservation Act, which stipulates that any fossil discovered in the Province must not be destroyed or removed from sites where they are found without the required permit.

Safety tip:
Wear sturdy shoes that cover your toes.
Double check the tides of the day, always be back 2.5 hours before high tide.
Rocks, green algae and seaweed are slippery when wet.
Rock falls every day, keep away from the wall.